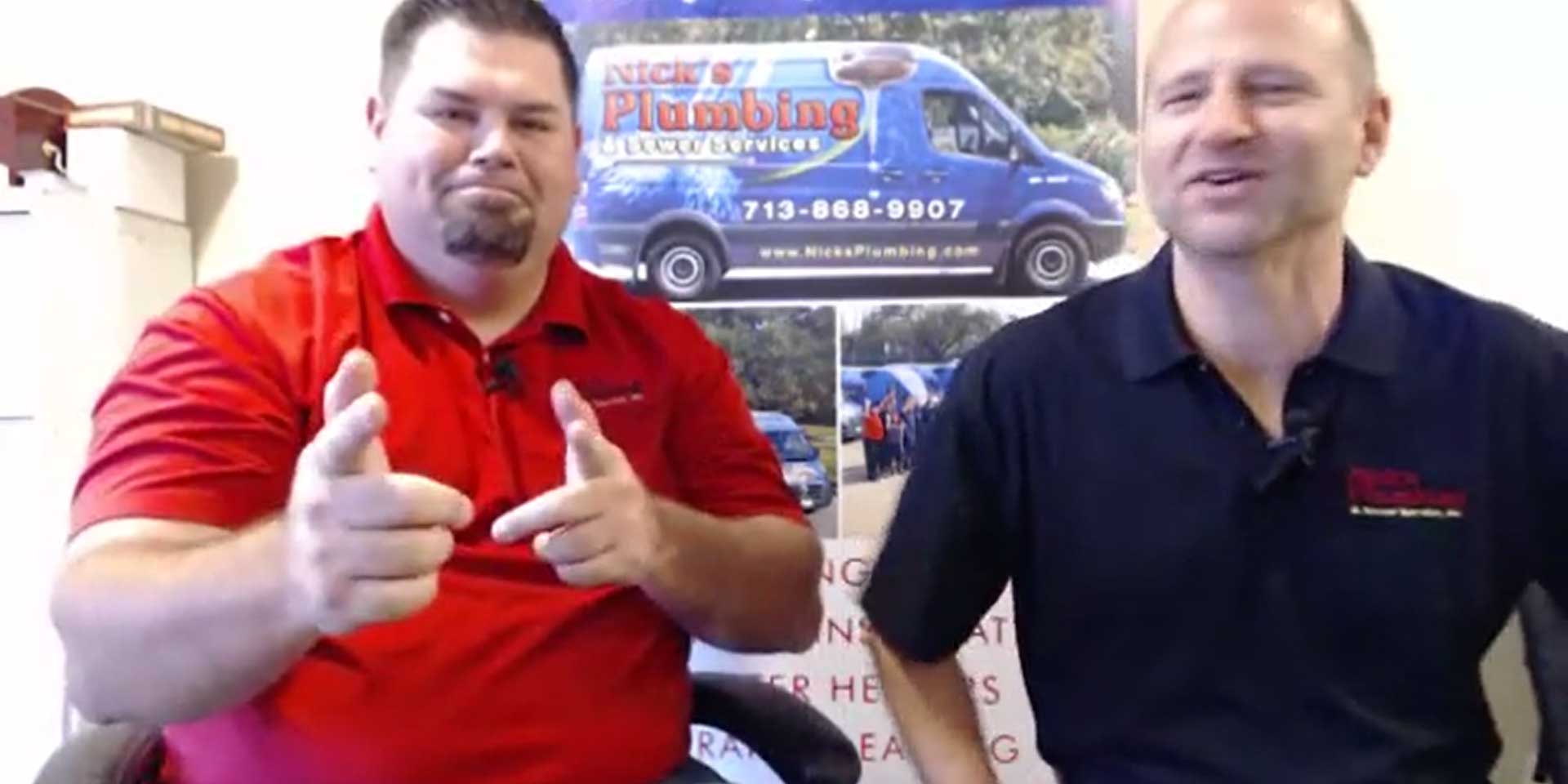 In this weeks Facebook Live Q&A we talk about what Hydrostatic Pressure Testing is and how it can help detect a leak in your homes plumbing.

you always should do hydrostatic testing. Why? Why would you? Why would that be? Checking the drains. Specifically checking the drains. So the question Mike last week sent in a question from Meyerland, which is seven seven o nine six, which in seven seven o nine six. All of your drain systems are going out. By the way, if you’ve got an original house that those drains underneath your slab have not been redone, you need to get them checked whether you’re buying or selling, but what I want to talk about today, specifically buying a house when you are the buyer of a house, you should always do hydrostatic testing. Houses move. They shift a pipes, get dislodged, and especially cast iron in the 77096 zip code. What happens to cast iron is it disintegrates. That hydrostatic testing will pick up that it has disintegrated and guys, let me tell you, if you don’t do a hydrostatic test and you have a leak, you’re going to be spinning 20 to $40,000 fixing it on a two and a half bathroom hats.

You need to try to avoid that expense before you say I do to the house. You agree with that? I would. I would absolutely agree. If you’re talking about large chunks of money to repair it versus large chunks, it’s huge and you know, versus having to push out their down payment versus getting it tested before. It’s absolutely something that the test is a lot cheaper than the repair, so it’s definitely one of those things that would be a good insurance to get checked out before real estate agents should be telling you since you are buying a house to do this 100 percent of the time, and I know a lot of agents are doing this, but there’s still a lot of agents not doing this and what you’re going to hear is you don’t need to do an hydrostatic test on a new house because it’s pvc.

That’s not true. You should do a hydrostatic test on any house at any age to make sure that those pipes are holding. Because again, once you just spent all your money on the down payment of the house, um, do you want to go spend another 20 to 40 grand? I know I wouldn’t, I wouldn’t do that. So let’s kind of get in the nuts and bolts of how a hydrostatic test works. So underneath the slab, you’ve got an entire drain system, right? When you run water out of your faucet, where does it go? People just expect it to go somewhere, a lot of people don’t even know where it goes, but I’m here to tell yet it goes down the drain. Right? And um, when it goes down that drain system, that is what you’re going to be checking on that hydrostatic test. So what you do is you block off your entire drain system underneath that slab and you block it off to the exterior of the house.

And how do we do that? We have this rubber ball that we can push to the edge of the house and then you fill it up so it does not allow any water to pass that ball. And you inflate that with air chamber. That’s right. And then on the inside you have a monitoring point. Well, you can pull a toilet for a monitoring point. A, you can do it sometimes through the shower, um, as a monitoring point, um, and you’ve just let water fill the entire system. Okay? And when that water fills the entire system, you can tell by your monitoring point because it’s going to be full to the slab it make sense? Yeah. So now the system is under a pressurized test with the liquid correct, very high pressure guys, water weighs just shy of eight pounds a gallon. Can you imagine how many gallons that piping is holding underneath your house?

So it’s going to show you that there’s a leak when you do this hydrostatic test. Now in saying that you’ve got to sit there and watch it for about 20 minutes for water loss and that’s when you know you have a leak or you don’t have a leak. That’s simple. Now I’m speaking where it’s simple, but on our end it’s complicated and it’s difficult work. Not too difficult. If they don’t have a leak, it’s not too hard at all, right? It’s whenever they, the present of the leak is shown that they do have one finding out where it’s at. That can become very intricate and detail and tough. So. So what John is saying is that’s called an isolation test. So let’s just say there is a leak. You need to go ahead and pay the money, the additional money to do what they call isolation testing.

So then we take these inflatable balls, put them in different drain systems underneath the house, and we just fill a section and we figure out what is leaking, whether it’s one leak, two leaks or three, three leaks and we figure out, um, from that standpoint how many we have. And then we do a repair plan. And guys, plumbing companies are engineers of this repair plan A. Well, you don’t hire anybody to do it, we do it. So that’s why it’s very important for you to hire a good plumbing company that does this type of work because again, we are the engineers and you’re paying us to engineer this properly. There’s different times where there’s different engineering as well, depending on how many leaks that are discovered and where they’re discovered.

But I will tell you this. So there’s a lot of plumbing companies out there that will go underneath your slab and they will do a repair instead of a redirection. In my book. That’s a huge. No, no, but the way they sell you is it’s cheaper. So you’re looking at cost only, but you’re not understanding the work. It’s very important that you understand when you have a leak, you’re piping structure. It’s not that one little part that’s bad. The whole thing’s gonna typically be bad and they’re going to sell you a small repair and go underneath and escalate underneath your slab to fix it. My book is a huge. No, no. Is it legal from the state of Texas and the city of Houston? Absolutely it is. They can do that, but you’re not understanding what you’re paying for at the same point and you’re going to be going underneath that slab again at some point to do it properly.

That makes sense. Absolutely. I think that, uh, you know, what we always try to do and what our plumbers are trying to do is, is we want to give our customers permanent solutions. Yeah, right. On permanent solutions. And we try to fit their needs and our solutions together to make sure that they’re taken care of 100 percent. We don’t want a call back. No, absolutely not. I don’t want that phone call in two or three years that, hey, I’m stopped up again and okay, well another piece of pipe is broken down right next to the area that we fixed two or three or four years ago. It doesn’t make any sense. So hydrostatic testing is critical when you’re purchasing a home. Now why would you do it? When you own a home? Why would you need a hydrogen static test if you own a home and you’re not moving or buying or selling?

Ah, man, there’s several different reasons. Um, you notice things with the, maybe the slab, right? You notice a stoppages, you noticed water coming up that in your bathtub that maybe has mud in it. Um, there’s a lot of different things that could come up as to that triggers, hey, I need to get it checked out. If you’re in an older home, you know, and you’ve lived in for 10 plus years and you’ve had a couple of those issues, it’s not a bad thing to get checked out regardless. I mean, why do you rotate your tires? Correct? You know, it’s a maintenance, right? But people don’t think that way with their house on a lot of different issues. And so let me get a little bit more specific in what you said. If I own the home, why would I do a hydrostatic test? And that’s the way that I approach every home, right?

Why would I need that? Well, let’s go back to your point. Foundation issues. If you start having foundation issues cracking in sheet rock, uh, you know, the house is not level well, that’s a telltale sign that underneath your slab you’ve got a plumbing problem. It’s typically when you start getting foundation movements like this, it turns out to be a plumbing issue because you’re piping cast iron has disintegrated or your PVC has come apart somehow. And it’s, it’s evacuating the soil out from underneath the slab. From that standpoint, it’s going to create foundation or could create foundation problems. That’s one. That’s why I would do it. The second thing is, let’s say I didn’t know that the pipes were in bad shape, but if you have a foundation company come fix your slab and you’re putting in peers and they’re lifting two inches over here, three inches over here, think about that. Three inches. That pipe is not supposed to move, right? It is a rigid pipe, so if they’re lifting your house by inches and certain areas, you’ve got to do a hydrostatic test. 99% of the time that is going to create the leak when they lift the house, and you did might not have had one before, but typically you’re going to have one now.

That makes sense. Oh yeah, absolutely. Absolutely. Happens more times than you think. Yeah, so let’s go through the areas right now because this coal came in from Meyerland, which is 77096 but another area that’s identical to our land is going to be the Memorial area from Gessner all the way to Dairy Ashford, all those homes in there, all of that cast iron is going out as well, and that’s the 77079 zip code. And you’re in the same predicament as Meyerland is, especially with the original cast iron and. 77042 , 77079 Meyer land. Yeah. And parts of Bel Air. If you’re fortunate enough for your pipes not to have been replaced already is probably a good idea to at least get them checked out. You are absolutely today at the end of the shelf life, the shelf life a decade ago, 10 years ago probably. I mean those houses, Meyer lands kind of interesting because my Ireland’s got it two ways. They’re getting beat up there. There are soil is a little bit more acidic over there. They’re getting beat up from the outside and they’re getting beat up from the inside. Right. So they’re getting kind of double whammied over there. Yeah.

But I appreciate the questions. Thank you guys. We need more questions, so please send them in during the week and are. So where are we going to send these questions to?

Okay. I like that idea. Simple or call me direct. It’s Richard. We’ve got John.

They can go to our website.nicks plumbing.com. We have chat available. We have fill forms on the website or just give us a call. 713-868-9907

That’s right. Or shoot me an email. My email’s on the website and John’s email is on the website. Let your phone shame on you. That was really quick. Well, thank you guys. We’ll see you next week. Thursday, 11:00. o’clock. See you then. Thank you.

Finding A Plumbing Company Near Me 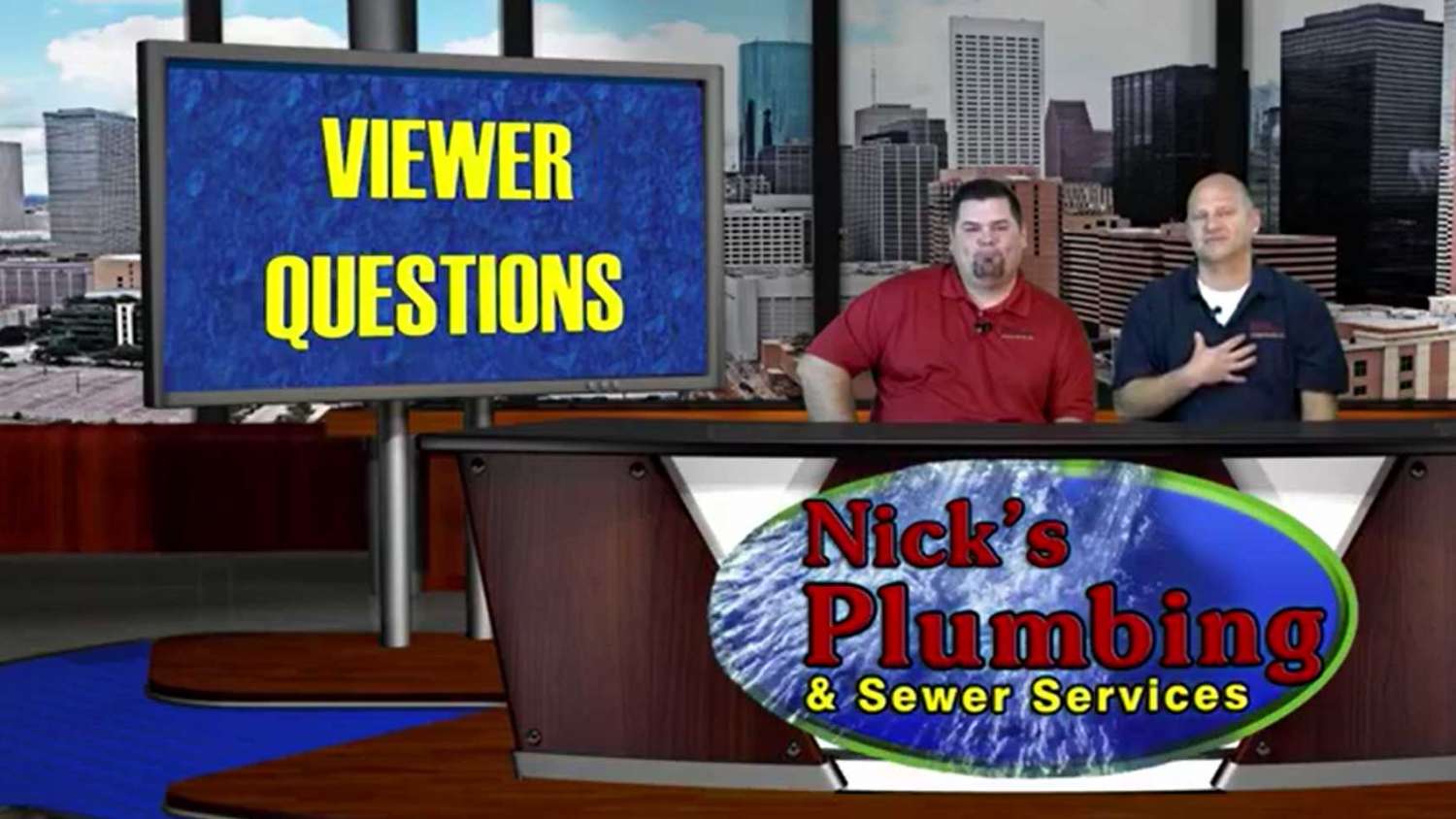