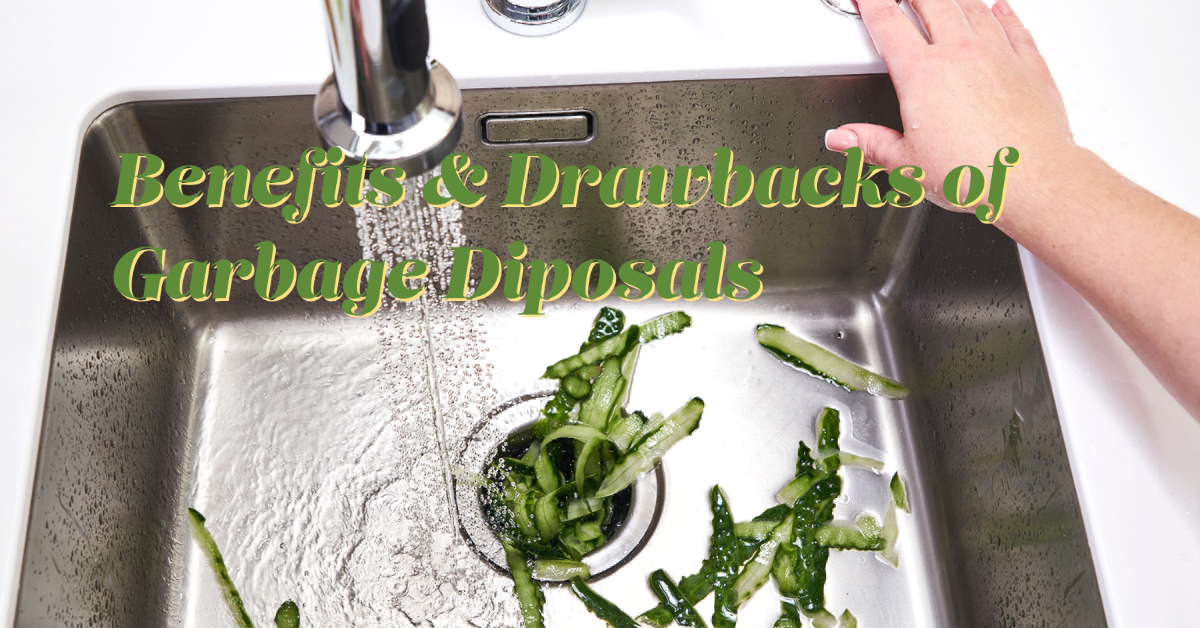 Are you thinking about installing a garbage disposal? Maybe you just moved into a new place that has one and you’ve never used it before. In either case, we want to clear things up about garbage disposals. In this piece, we’ll talk about the major benefits and drawbacks of using garbage disposals for your food waste.

What Is a Garbage Disposal?

Garbage disposals have been around for close to 100 years, being introduced around 1927, and gaining popularity following World War II. By the 1980s, the electric garbage disposal was had become standard equipment in new construction homes, and let’s face it, in the 1980s, a disposal was still a neat gadget to have. Finally, Americans found themselves with the freedom to decide whether or not to scrape their dinner plates before putting them in the sink. This was huge.

The concept behind your garbage disposal is deceptively simple: a couple of blades pulverize chunks of leftover food before it can get into your kitchen drain and clog it. Think of the garbage disposal as a blender that makes smoothies for your sink’s plumbing. After getting blended, the food goes through the waste line along with the other water going through your sink.

Garbage disposals are mounted underneath the drain outlet of a kitchen sink, and once connected to an electrical source are ready to perform. Every time the homeowner turns on their disposal, they are reducing the chance of clogged sink drains, and backed up sewer lines that occur from too much food waste entering the drain.

There are a lot of reasons why people love garbage disposals. Let’s talk about some of the major benefits.

1. Clean-Up is So Much Easier

First and foremost, a garbage disposal will make your life so much easier when it comes to cleaning up after preparing and eating a meal. It’s still a good idea to keep a mesh strainer in the drain opening to prevent non-disposal-friendly items like silverware and saltshakers out of the hopper. Catch your small, loose food waste pieces and drop them in the garbage can, or rinse them into the disposal before running it.

Although installing a garbage disposal adds an air of luxury and convenience to your kitchen (especially if you’ve never had one), you shouldn’t be spending a lot of money for it. In most cases, you’ll be able to find several reliable units for less than $100, and while installation may be a breeze for the “do-it-yourself” inclined homeowner, the average Jo is going to want a licensed plumber to put it in. Fortunately, garbage disposals have a pretty long lifespan for the money spent, and you can easily expect to get 5 – 7 years from a new unit installed today.

3. They Protect Your Plumbing

We are a horrible friend to our plumbing appliances, by nonchalantly dumping food scraps down the drain, you can expect a pipe blockage in the future. Depending on how bad it gets, it could result in an emergency call to a plumber and a bill of hundreds of dollars. A properly used and well maintained garbage disposal helps you avoid these types of major plumbing issues.

A garbage disposal can be installed into almost any existing kitchen sink — thanks to its universal design. You don’t need to renovate your whole kitchen or upgrade your sink to enjoy the benefits of a garbage disposal. The fact that they’ve been used in American homes for close to 100 years, without any major change to the design, is a testament to how unique and important of an idea they were.

Hey, let’s be honest, garbage disposals are great, but there are definitely a few drawbacks that come with them to consider. We’re not trying to lead you away form a disposal, but rather, just giving you some info to keep in mind one you’ve had yours installed.

1. Certain Foods Can’t Be Disposed of in One

Always be mindful of what is going into your garbage disposal. While things like bones are an obvious “no-no” in the garbage disposal for the blade damage they can cause, it’s also important to also keep sticky stuff out of the disposal. That means no mashed potatoes, rice, or pasta should be stuffed into your drain, cooking grease, coffee grounds, and stringy fruit and vegetable skins should be avoided as well.

Some people don’t like the idea that a garbage disposal is “another thing that needs maintenance” and choose to ignore them until there’s a problem. We try to see it as maintenance being the minimal price you pay for having such a handy device in the kitchen. Try to run the hot water straight into the drain occupied by the garbage disposal and let both the water and unit run for 30 or 40 seconds. Want to improve the smell in your kitchen? Try tossing a couple of lemon wedges into the disposal while you’re flushing it out. Your kitchen will smell citrusy fresh, and lemon rinds are easy to break down, so they won’t jam up your disposal.

Like any other household appliance, your disposal can fail, either from age-related wear and tear or damage from misuse. As mentioned earlier, a good quality, well-maintained unit should be able to deliver 5 – 7 years of reliable performance; just be mindful of what you’re putting into it. Any garbage disposal that hums without turning on, makes banging or rattling noises, or has ceased to do anything; it may be time to consider replacing it.

There you have it — we just reviewed some of the significant benefits and drawbacks of owning a Garbage Disposal. They’re easy to use, inexpensive, and very convenient. However, they require some maintenance, can break, and can’t process some items. If you want to learn more about installing a new garbage disposal in your kitchen, give the licensed and experienced professionals at Nick’s Plumbing a call today.

What is Hydro Jetting Drain Cleaning?

Do It Yourself Shower Head Installation