Dealing With a Drain Clog Before Calling a Plumber | Nick's 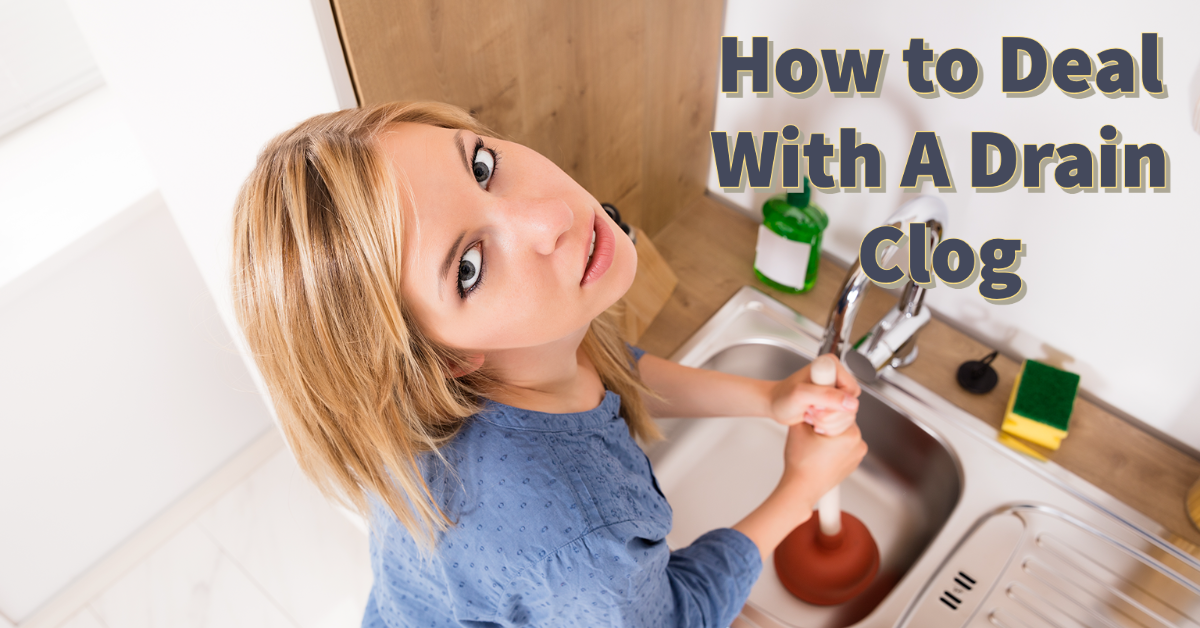 Quite frankly, the subject can be draining.

Drain maintenance is easily the single most crucial task of keeping your home’s plumbing systems flowing correctly. Drain locations aren’t limited to sinks and bathtubs. In a typical home, in addition to sinks, tubs, and toilets, we have air conditioning systems that produce condensation that must be routed away from walls and ceilings into an AC drain. Laundry rooms need access to the home’s drain line for sinks and washing machines. Garages often have floor drains, and most homes have at least one French drain on their property to control standing water in the yard.

The best method for maintaining clear drains is always to be aware of what you and your family are introducing into the drain system. Even if you have a garbage disposal, putting cooking grease and sticky food like rice and pasta isn’t advisable, as it gets stuck to the inside of the drain, it will inhibit water flow and start to stink sooner than later.

Stuff To Keep Away from Your Drains:

Nearly every DIY website has a method for clearing drains of relatively minor clogs, often made up of items you already have in your home.

Many of our customers have faced a tough drain clog and reached for a chemical-based drain clearing product, like Liquid Plumbr® or Drano™. It’s not that chemical drain cleaners aren’t effective. They are. These potent acid compounds basically melt their way through the hair and soap scum clog, and at the same time, they are also breaking down your pipes. On extremely dense clogs that may take several minutes to dissolve, the chemical drain cleaners will be “off-gassing” sulfuric acid or lye fumes into your kitchen or bathroom.

This method will take you straight back to the days of middle-school science class, and that time you built a papier-mache volcano. The same formula you used to make your mini-Vesuvius erupt is what you’re going to use in your clogged sink or tub drain.

Remove as much water as possible from the basin and pour the baking soda directly into the drain. Don’t worry if it doesn’t all fit; that’s where the vinegar comes in. Pour it into the mound of baking soda and watch the magic! Once it starts to fizz, the mixture will work itself into your drain and expand as it does, breaking the blockage apart from the inside.

Let the mixture do its work for at least fifteen minutes, then follow it up with the pot of boiling water to move that clog into the sewer main. It’s also a good idea to let the hot water run in the sink or tub for a couple of minutes, just to allow any residual muck to be flushed away.

There’s a reason you can find a plunger in just about every bathroom in the country; they do their job well. There are three different types of plungers, and each one has a specialized purpose:

When most people picture a plunger, it’s this guy that they’re thinking about. While they are the most popular plunger-type available, cup plungers are only helpful if your clogged drain is surrounded by a flat surface, as found in sinks, bathtubs, and showers. Cup plungers aren’t of any use for a toilet clog, as the bowl’s curvature will prohibit a proper seal, which is what a plunger requires to build up enough pressure to dislodge a blockage.

Plunger #2: Toilet Plunger
Good For: Toilets
Bad For: Anything that isn’t your toilet, because, yuck!

Referred to by plumbers as a “flange plunger,” this plunger is similar to our friend, the “cup plunger,” with its rubber cup at the end of a wooden stick. What makes this plunger different is a soft rubber flap inside the cup that can fold out to fit tightly over the rounded toilet drain. The result of the additional flap allows the plunger to create and maintain a seal as you operate the plunger.

Plunger #3: Accordion Plunger
Good For: Deep Clogs in Toilets and Drains
Bad For: Good for all clogs.

Instead of using rubber plunger cups, the accordion plunger is made of a semi-rigid plastic folded against itself several times. When inserted into the toilet or drain, the plastic flange forms a seal allowing the plunger to fill with air when plunging. This enormous blast of air they provide is strong enough to dislodge the majority of heavy clogs, but if there’s not a complete seal, you could end up cleaning far more of a mess than you’d intended.

Before we can explain how to clear out a P-trap, let’s first discuss what a P-trap is in the first place and why you have several of them in your home. If you look beneath any of the sinks in your home, you’ll see a pipe that somewhat resembles the letter “P.” Hence the name. Now, P is in the eye of the beholder, and many people claim it should be called a “U” pipe. Or an “S” pipe. For the sake of this blog, we’re going to stick with P-trap. 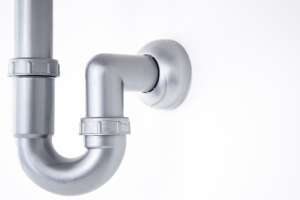 The shape of the P-trap allows a small amount of water to remain trapped in the pipe to prevent sewer gases from re-entering the home. The shape of the P-trap also enables a lot of really gross stuff to collect at the bottom of the trap that doesn’t get flushed away through regular use. Every plumbing drain in your home requires some form of water trap, but the only ones you can see are under the sinks. Bathtub and shower P-traps are beneath floors, behind walls, and the P-trap for your toilet is built into the base of the bowl assembly.

An important symptom of a blocked P-trap is that only one drain is having a hard time draining. If a sewer line or a stem of your bathroom drain lines becomes blocked, you’re going to have backup issues in an entire bathroom or even the whole house. If you’ve been able to determine that your clogging problem is isolated to a single drain, try cleaning out the P-trap section of the drainpipe.

Before loosening any fittings:

Start by getting as much water out of the sink as possible.

Use a bucket, a coffee cup, or a teaspoon if you must, and then soak up what remains with a towel.

Using your pipe wrench (for galvanized steel pipes) or your bare hands (PVC pipes), turn the nuts at each end of the P-trap pipe counter-clockwise to loosen them and allow the P-trap to fall into the bucket, along with any water trapped inside.

If the cause of your slow drain is the blocked P-trap, you’ll probably have a large wad of hair and soap residue to remove. Use a DIFFERENT SINK to rinse any debris from the P-trap pipe, and be sure to remove any slimy residue from the pipe’s interior walls, which can attract hair and other particles to stick to it.

Once rinsed, ensure all washers and coupling nuts are in the right place and put the P-trap back in place. Tighten the coupling nuts, and run the faucet for a minute or two, making sure to feel around the fittings for any leaks.

Sometimes, a clog doesn’t want to go away. You may have tried our three previous methods for clearing your drain and are still looking at a backed-up drain. It’s not your fault. Before you call Nick’s Plumbing & Air Conditioning for a drain cleaning service, there’s one last trick we’re going to try.

When homeowners think about drain snakes, they are probably thinking about the electric drain snakes that plumbing companies would use. In the case of a single clogged or slow-clearing drain where you’ve already cleaned the P-trap, and it didn’t help, the solution to the problem could be a manual drain snake. If you don’t have a manual drain snake, they can be obtained at any local hardware or big-box store for less than $20. 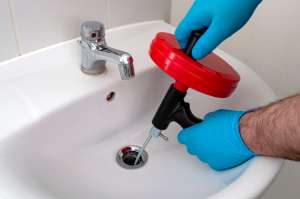 The illustration shows our handy homeowner inserting the end of the manual drain snake into the pipe via the sink drain. This method requires the snake to take a few turns on its way to the clog. Nick’s recommends that you remove the P-trap (that you’ve already cleaned) and insert the snake into the drain line that enters the wall. The snake needs to rotate freely to do its job, and fishing it through the drain could cause it to bind up in the turns.

Insert as much of the snake as you can into the pipe until you start to feel some resistance. Congratulations! You’ve found your clog. Push the snake a little further, allowing it to begin breaking up the clog, and operate the handle to rotate the probe. You may have to repeat this step several times, pulling out pieces of the clog each time. It took a long time for all that mess to build up in your pipes; you can spend an hour cleaning it out properly. Show your plumbing some love.

For those of us that aren’t natural-born do-it-yourselfers, Nick’s Plumbing & Air Conditioning offers all types of drain clearing solutions for your home. Whether you’ve got a single sink drain clog or a sewer main clog that’s affecting the entire house, give Nick’s Plumbing & Air Conditioning a call today. Nick’s has been clearing sink, toilet, and bathtub drains in Houston since 1979, and we have a five-star rating with over 150,000 satisfied customers. 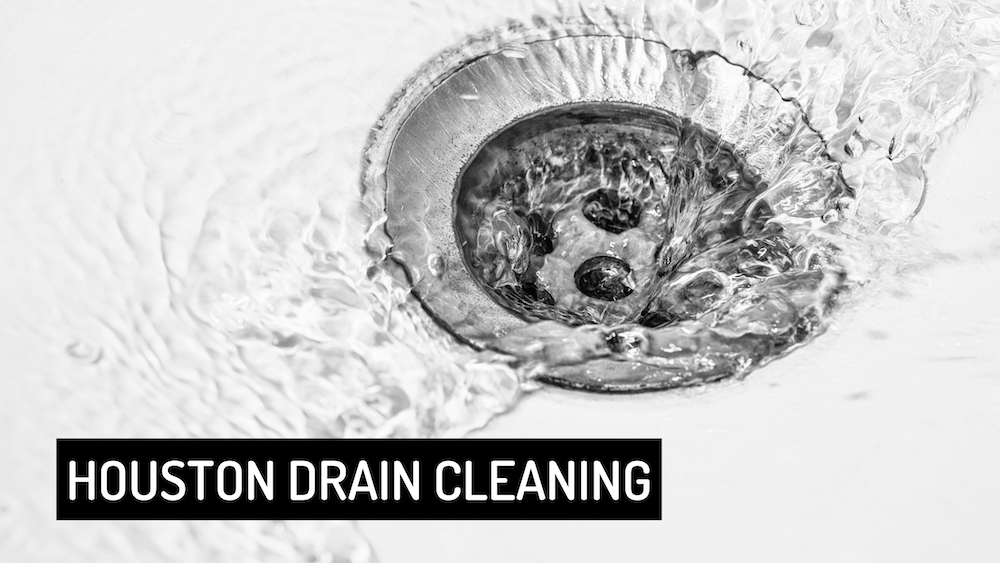 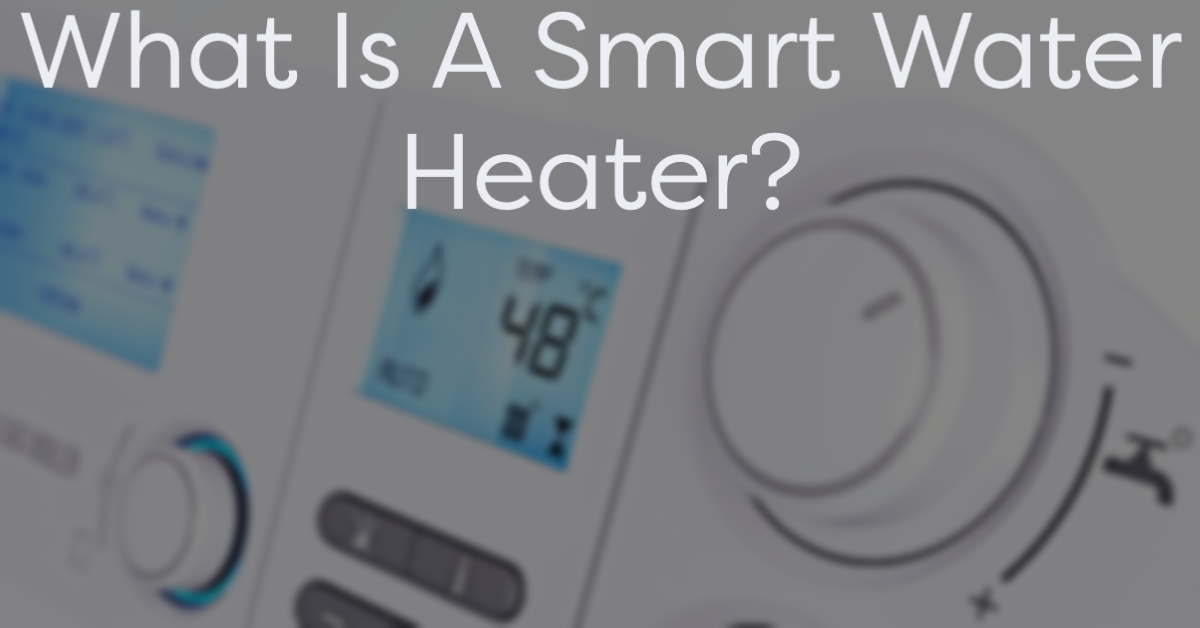